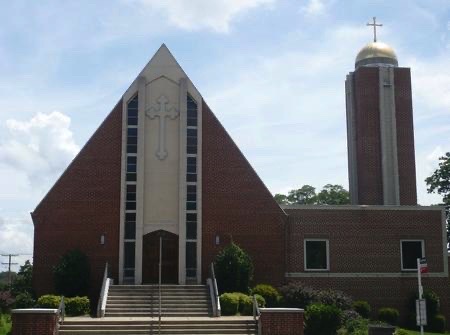 In the late 19th Century and the beginning of the 20th Century, a small group of immigrants from Syria and Lebanon settled in the Washington, DC area.  It was in 1908 they met and decided to have a Church of their own under the leadership of Mr. Elias Joseph.  In December 1908, Fr. Dumaney of Tripoli, Syria came to Washington and resided with Mr. George Hillow, where he held the first Service at his house, at that time about 20 people attended the service every Sunday.  Fr. Dumaney served here for about 6 months, after which he was transferred to Texas.

From 1909 to 1912, a few Priests came to visit and held Services for the people here at various times.  In 1912, Rev. Job Salloom of Philadelphia was ordained Priest and was sent here by Bishop Raphael Hawaweeny to be the permanent Priest of St. George of Washington, DC, at that time the community rented a room on the 3rd floor of a 3 story building at 7th and Louisiana Avenue, N.W.  This was the first permanent Church residence for the parishioners then.

In 1913, the first Church Charter was received.  The community continued to grow.  Thus, in 1920  property was purchased at 1009 8th Street, N.W., which for approximately 34 years, was home for the St. George Community.

In 1921 the Ladies Myrrh Bearing Society (LMBS) was officially formed, drafting their first constitution and electing Mrs. Thomas Abdo as their first President.  Additionally, the Sunday School was established under the Directorship of Mrs. Bahia Scordos.

In 1936 Fr. Salloom passed away and Metropolitan ANTHONY Bashir was appointed as the new Metropolitan Archbishop of New York, which at that time and a new Priest, Rev. Benjamin Hoffiz, was assigned to serve this Parish. The Church was officially incorporated on February 8, 1938. In August 1939, Fr. Hoffiz was transferred to another parish and Fr. John Khoury became the new Pastor until 1947.

In 1940 the first choir was formed under the Directorship of Mr. Harry Hier. In 1945, under the leadership of Mr. William Dora, the present lot on the corner of 16th and Webster was purchased.  In 1947 Fr. John Khoury left and Fr. John Nicholas was assigned as the new Pastor until 1963.

From September 1954 to December 1955 we had no Church Building leaving the congregation to worship at the Chapel of St. Joseph of Arimathea at the Washington National Cathedral.  Also in 1954, Mr. George Amouri became the new Choir Director of St. George.

On December 4, 1955 the cornerstone was laid of the new church that was constructed under the leadership of His Eminence Metropolitan ANTHONY Bashir officiating, along with Mr. Jack Kogok, Chairman of the new building. Also in 1955, the Syrian Orthodox Youth Organization (SOYO) of Washington DC was formed.

In 1959 our Church of St. George hosted the first Eastern Region SOYO Convention.  In 1960, the building adjacent to the Church (where the custodian presently resides) was purchased and the mortgage of $60,000 was paid in full in 1963.  During the same year, we hosted the 18th Annual Archdiocesan Convention.  In 1963, Fr. John Nicholas transferred to another parish and Fr. Michael Abraham served at St. George for one month, after which Fr. Lou Mahshie was assigned to the Church in November 1963.

During Fr. Lou Mahshie's watch, Fr Gregory Rowley and Fr. Elias Dacy assisted him at various times until 1975 before being transferred. Fr. Anthony Gabriel was then assigned as the permanent Pastor  until 1977 when Fr. George Rados took over  before leaving in July 1979, when a new Priest, Fr. Paul Saliba, was assigned as the Pastor of St. George.

In 1990, we purchased the house that was home to our Sunday School for many years.  In 1997, Nicholas Tentzeras was ordained St. George's first Sub-Deacon. In 1999, Fr. Paul Saliba was elected Metropolitan of Austrailia and New Zealand and Fr. Joseph Rahal was appointed as our new permanent Pastor.

In May 2008, St. George welcomed Fr. Paul Matar as assistant Priest until November 2010. In 2013, Deacon Workineh Belesse was transferred to our church from Indianapolis, and in 2015 he was elevated to Arch-Deacon. In 2020, Sub-Deacon Nicola Said was ordained Deacon and assigned to our Clergy team. Fr. Joseph Rahal retired January 2021 and St. George welcomed Fr. John (Rassem) El Massih and his family on Theophany 2021.